JFS Provides Guidance and Support Throughout the Process

I recently had the privilege of spending an afternoon on Wright-Patterson Air Force Base with Sam Lauber. Some may know of Sam because of his beautiful photography, which can be seen from time to time on display at the Boonshoft Center for Jewish Culture & Education. However, our conversation focused on different topics that particular afternoon.

Sam, who served as a civilian social worker for the federal government for 36 years, was gracious enough to take me on a tour of the base. As we toured, I found myself in awe of his professional accomplishments.

Sam’s civilian work began in 1967, when he separated from active duty. During his tenure, Sam earned two military medals ~ a “Meritorious Service” award, and an “Outstanding Career” award. He was responsible for coordinating and supervising resource networks for military members at bases in Europe and the U.S., as well as developing and overseeing models for Family Advocacy programs. Sam also presented “Suicide Prevention” briefings to all units on Wright-Patterson Air Force Base, training 80,000 military and base personnel over four years.

As Sam continued to tell me about his successful career, I was intrigued at the special connection he had to one particular responsibility. Under the auspices of the Family Advocacy program, Sam was responsible for placing military children, with command approval, into military foster homes.

Living in Brussels, Belgium, Sam’s mother made arrangements in 1943 with the Mother Superior of a local convent to place Sam in a foster home for the duration of the war. Sam was very fortunate. His parents and sister survived the Holocaust and in the aftermath, the family reunited. In 1948, they left everything behind and immigrated to the United States, arriving in New York.

Although the circumstances around Sam’s foster care placement were different than those of the children he helped, Sam was still able to relate to the many emotions they experienced. In fact, Sam credits his own journey as an inspiration for his career path. By going through foster care, it helped nurture his compassion, awareness and understanding for people.

At the end of our tour, and after hearing about Sam’s accomplished career, I began to reflect on my own work with Jewish Family Services. We work every day to provide individuals and families within the Miami Valley with tools and services to lead happier and healthier lives. Sometimes we are privileged to help people, like Sam, take advantage of programs and services of which they may otherwise not be aware. 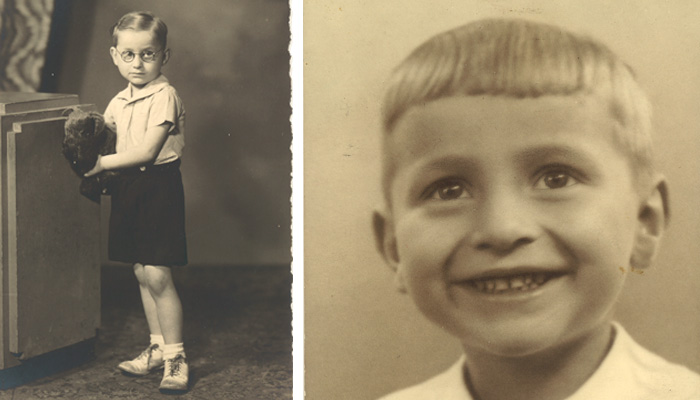 One such program is the Conference on Jewish Material Claims Against Germany, known as the Claims Conference. Since its first agreement with West Germany in 1952, the Claims Conference has paid more than $70 billion to over 800,000 Holocaust victims. While no amount of money can erase the suffering victims faced, or bring back those who were murdered, the payments serve as acknowledgment of the crimes committed against them.

Currently Holocaust victims in 80 countries and territories receive direct payments from Germany. There are several compensation programs, including the Article 2 Fund, Central and Eastern European Fund, Hardship Fund, and the Child Survivor Fund.

In addition to the pension funds, Claims Conference grant funds provide free, life-enhancing services such as light homecare and house-keeping, dental care, home safety modifications, hearing aids, and medical adaptive equipment. The services allow Holocaust survivors to live in their homes independently and age in place with dignity for as long as possible.

Knowing Sam’s history and having established a rapport with him, I informed him of the grant program. While at first he was interested, after reviewing the paperwork, Sam decided not to complete the application. However in 2016, Sam contacted us at Jewish Family Services to pursue the application process.

Jewish Family Services was able to support Sam through the process. Sam and his wife, Ellen, gathered the required documentation and started the application. Jewish Family Services assisted with preparing the application for submission to the Claims Conference, indexing appendices, obtaining notary stamps where required, and creating and submitting an affidavit as alternative documentation. The desired outcome was for Sam to receive a one-time restitution payment and be recognized by the Claims Conference as a Holocaust survivor.

Through the grant, Sam was able to receive a hearing aid, reimbursement for dental and medical services, and payment for a motorized scooter. Sam is getting the medical support he needs without having to deplete his savings and retirement. When I asked Sam whether it was worth completing the application, he replied, “absolutely.”

“Would I encourage other people to do it? Absolutely. It’s a long process, but there are supportive, helpful people to assist you,” said Sam.

Jewish Family Services is grateful to Sam and his wife, Ellen, for allowing us to share Sam’s story.

Claims Conference grant funds are available to support Holocaust survivors who live independently outside of a care facility. Jewish Family Services of Greater Dayton works as the local contact and coordinates with Cincinnati’s Center for Holocaust Survivors, which manages the grant locally.

Whether a Holocaust survivor already received a one-time restitution payment with or without a monthly pension, or if they have never received a one-time payment and have not been recognized by the Claims Conference, Jewish Family Services is here to support survivors through every step of the application process.

If you or a loved one is a Holocaust survivor and would like more information about grant-funded services, please contact Tara Feiner, JFS Director at (937) 401-1546 or tfeiner@jfgd.net.