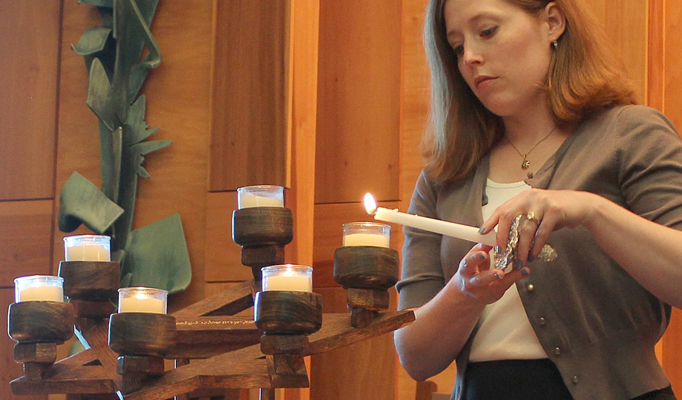 Yom HaShoah, also known as Holocaust Remembrance Day, occurs once a year between the months of April and May. Shoah, which means catastrophe or utter destruction in Hebrew, refers to the atrocities that were committed against the Jewish people during World War II. This is a memorial day for those who died in the Shoah. The Shoah is also known as the Holocaust, from a Greek word meaning “sacrifice by fire.”

Every year, the Jewish Federation of Greater Dayton in collaboration with their Holocaust Committee and the Dayton Holocaust Resource Center put together a remembrance service for the Dayton community. The synagogue location rotates yearly.

The Jewish Federation of Greater Dayton and it’s resources offer many connections and opportunities to learn about the Holocaust in addition to Yom HaShoah year round. 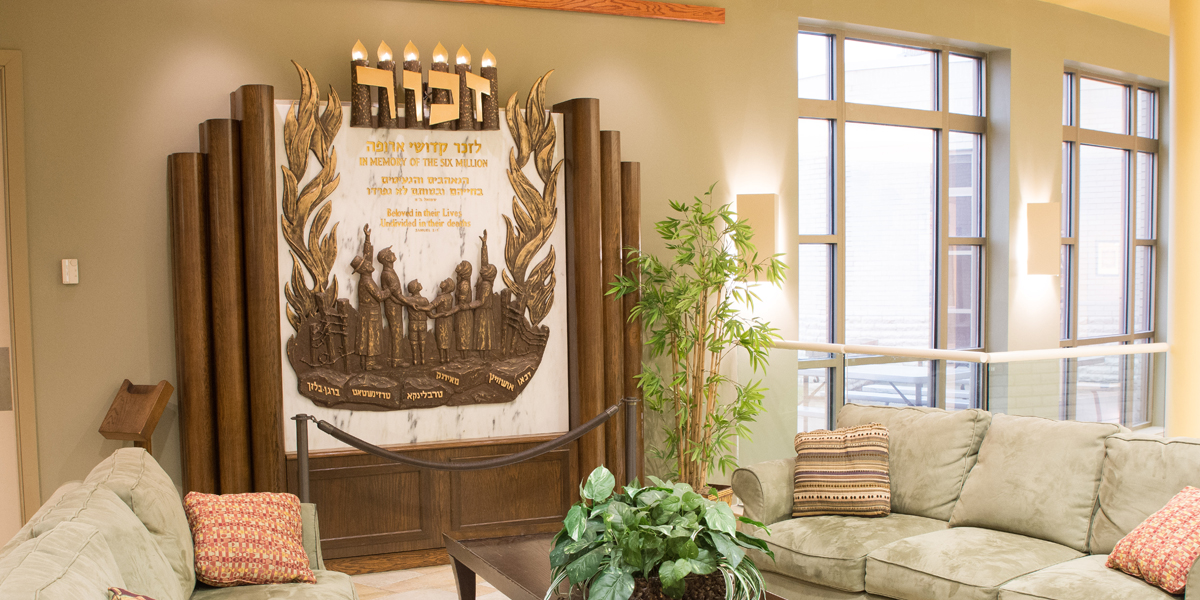 The Holocaust Memorial Here in our Building

The Holocaust Memorial was dedicated on September 11, 1983 and was installed in the lobby of the Jesse Phillips Building within the Jewish Community Complex. The memorial was designed and built by Kenneth Fixler of Cleveland, Ohio. It was moved to its current location at the Boonshoft CJCE.

The memorial wall uses the motif of six, in memory of the six million Jewish martyrs who died in the Holocaust. Six wood columns, three on each side, frame a large off-white marble slab which serves as a background for sections of heavy bronze castings.

The names of six death and concentration camps appear in Hebrew. Read from the right they are Dachau, Auschwitz, Maidanek, Treblinka, Theresienstadt, and Bergen-Belsen. Above the names are bronze reliefs of a family holding each other. They are standing amid barbed wire and fire, reaching through the language of memory towards six lighted tapers at the crown of the art. Emblazoned upon tapers are the Hebrew letters finished in gold leaf, proclaiming the message “zachor” (remember). Words of dedication, Hebrew and English, are cut into the marble.

The Dayton Holocaust Resource Center was established due to community need for in-depth resources and a concentration of expertise and knowledge on the Holocaust. With increasing interest in learning about the Holocaust, concerns cropped up about ensuring resources and information shared were accurate; in a time without the internet, it was difficult to compare information to other sources for accuracy. Education up to this point had been entirely concentrated in survivor and educational visits, and a single newsletter the Committee participated in.

So, seeing a need, a group went to Hillel in the early 1990s, and was offered space in their library which became the Dayton Holocaust Resource Center. It was a small but extremely effective educational resource, and after ten years at Hillel, Wright State University built what we now know as the Holocaust Resource Center and invited the Center to relocate there in 2001. This continued a longstanding partnership, as in the mid-80s Renate Frydman began the Faces of the Holocaust exhibit with Wright State University, which brought Holocaust education across the country and internationally.

Starting in 1995, the Holocaust Education Committee began discussions about taking artifacts to schools for education. They did not at the time possess any, and so difficult but crucial conversations with survivors were started to gather artifacts. Spearheaded by Renate Frydman, who through her experience with the Committee and Holocaust Resource Center knew many survivors personally, the following year and a half brought in hundreds of artifacts and photos.

Now entrusted with these pieces of history, it became necessary to bring them to the community. An exhibit was set up at a school in Kettering, with some of the artifacts on display, and it caught the attention of the Air Force Museum. In 1998 the gallery was designed to house the artifacts and educate visitors on the Holocaust. It was intended to be a temporary exhibit for four months, but proved too important an exhibit to remove. The exhibit started in January of 1999, and is quickly approaching its 20th year.