Displaced Again, One Woman Struggles to Survive in Ukraine 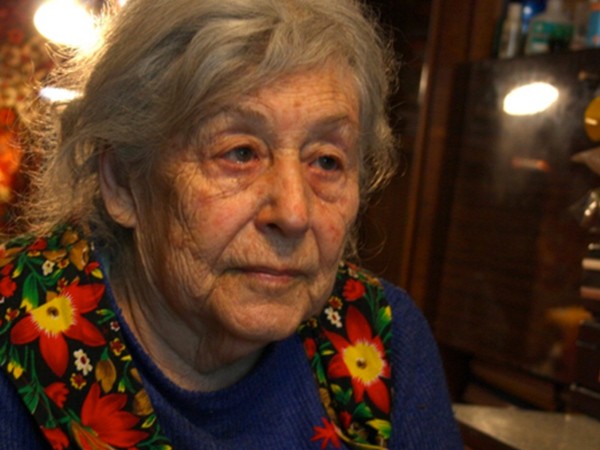 As a teenager during World War II, Aza and her mother fled to Central Asia after the Nazis invaded her native Ukraine and her father was killed on the front lines. Even when it was considered safe enough to return, mother and daughter stayed away. With their hometown destroyed, they had nothing to go back to. Instead, they settled in the eastern Ukrainian city of Slavyansk, now caught in the crosshairs of a country in crisis.

Aza soon adopted Slavyansk as home. There she studied to be a math teacher and taught for 35 years. And it was there she met her husband and gave birth to her only son, Alexsandr. Even after Alexsandr moved to St. Petersburg, Russia and her husband died, Aza remained in Slavynask.

Alone and vulnerable, she became a client of JDC’s Hesed social welfare center in her late seventies. JDC has watched over her for the last decade. Given her age and frailty, the homecare her local Hesed provides is invaluable.

When the crisis in Ukraine intensified, Aza couldn’t remain in Slavyansk. It just wasn’t safe. Alexsandr came back to Slavyansk to relocate his mother. Local Hesed staff gave him the contact information for Hesed Abraham in St. Petersburg and notified their colleagues about Aza’s arrival. But with exceedingly limited transport in the area, it took six months for Alexsandr to find a volunteer to drive them to the city.

Aza and Alexsandr currently share a small two-room apartment far from the center of St. Petersburg. As a citizen of a foreign country, Aza is not eligible for a state pension or any other form of state social support. Alexsandr applied for a temporary city registration for his mother. It’s still pending.

Staff at the JDC-supported Hesed Abraham and Eva Welfare Center is doing its best to help her under such difficult circumstances. They provide Aza with 25 hours of homecare a week, as well as monthly medicinal subsidies and a food card. That crucial care, and a strong sense of survival, keep Aza going.

Jewish Federations across the United States are helping Jewish residents of Ukraine in a myriad of ways. What role do you think Dayton plays in this story of Tikkun Olam?

Share your thoughts, and help us spread Tikkun Olam via the web: