In August of 2017, a hurricane of historic proportions devastated Houston, Texas. Hurricane Harvey dumped over 51 inches of rain in a matter of days. Thousands upon thousands of people living in Houston faced catastrophic damage. The cost to the community was over $200 billion in damages. And most tragic of all, 77 people lost their lives.

According to Jewish Federations of North America, a staggering 71% of the 51,000 Jews who live in Houston resided in areas affected by flooding. Over 1,000 Jewish families were displaced from their homes. Six major Houston Jewish institutions suffered enormous flood damage, including three of the largest synagogues and a day school.

Once again, when Jews are in need, Federation is there to help. Donations poured in from all over, including many from people in Dayton. Through Federations’ Hurricane Harvey relief efforts, over $14 million was raised to assist in providing temporary housing, transportation, food, cleaning supplies, and trauma support.

Watching the Jewish community rally around Houston in the wake of Hurricane Harvey highlighted how essential the Jewish Federation system is. The Jewish Federation of Greater Dayton is one part of a large network of Federations across North America. Our missions all revolve around sustaining and strengthening Jewish life. At times, that mission can feel vague. It’s easy to forget that Federations serve a vital purpose: every day the funds we raise change lives. 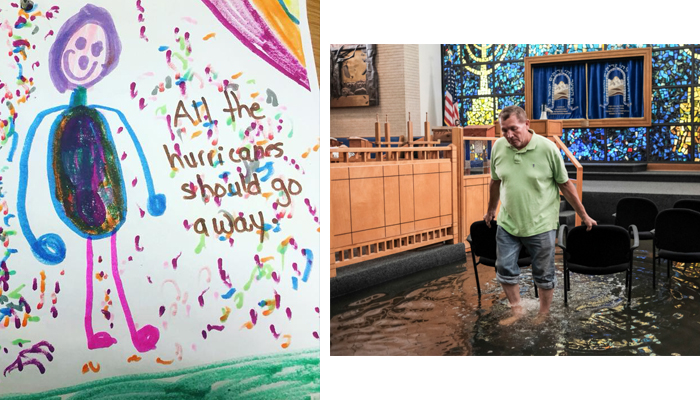 In Dayton, the Federation’s mission is to care for those in need, strengthen Jewish life, and create connections among Jews-acting locally, in Israel, and around the world. Each year we ask our community to make a meaningful gift to our Annual Campaign. You can see the impact of Federation on Jewish life in Dayton every time you walk into the Boonshoft CJCE, see Jewish Family Services drivers transporting seniors around town, watch a performance put on by students at Hillel Academy, and through the countless other ways Jewish life in Dayton is vibrant and thriving.

Jewish Federation of Greater Dayton Past President Debbie Feldman shared her reason for giving to the Annual Campaign at the Women’s Philanthropy Brunch this past fall. In her remarks, Debbie mentioned that she relies on Federation to be the eyes and ears of the Jewish community. Federations are uniquely positioned to be able to identify the areas of greatest need within the Jewish world, because of the network of Federations and partner agencies. We can share those needs with our local communities and organize a response.

Hurricane Harvey is a powerful example of how Federations unite the Jewish community in times of crisis. Federation is at work in more than 70 countries, strengthening Jewish life in countless ways. We are powering the reconstruction and revitalization of communities around the world, providing relief and respite to those in crisis, and offering comfort and support to the most vulnerable among us.

For more information on how your campaign donations help our community and Jewish communities across the world, please contact Juliet Glaser, Campaign Director, at (937) 401-1558 or jglaser@jfgd.net.