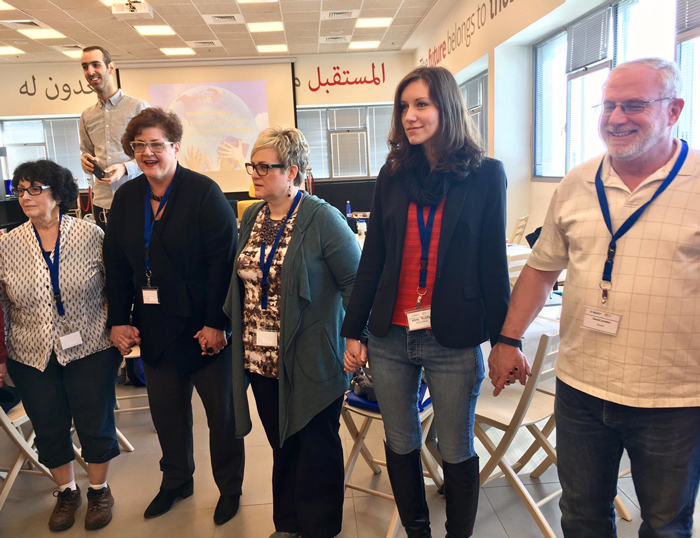 Episode 7:  PartnershipGether Steering Committee Meetings – Getting Down to Business! Overall, the Partnership2Gether experience was so immersive; it deserves its own space apart from the sights and sounds of Israel! Below is part 1 of 2 detailing the fantastic program we support in the Western Galilee. Today (Tuesday) we got down to business with the start of the P2G Steering Committee Meeting.  We began with an ice breaker activity led by Nate Shapiro, director of development from the Jewish Federation of Omaha – we all gathered in a circle and tried a listening activity that was a hoot.  It was a great opportunity for all the communities to relax and get to know each other a bit better. Our meeting took place at the Akko Center for Arts and Technology (A – CAT).  The A-CAT center is the first of its kind outside of the United States and is an affiliate of the successful non-profit arts, education and job training centers that were the brain child of Manchester Bidwell Corporation CEO, Bill Strickland. A-CAT offers vocational courses for single mothers, young adults and children of all faiths where the center’s courses serve to build bridges, provide free education and encourage dialogue among the area’s religions.  Bill Strickland believes “when people have a reason to live, they don’t have a reason to die.” We toured the facility and were shown all of the state of the art equipment the youth have access to:  3D Printers, photography studio etc.  The classroom like atmosphere also is set up to establish a culture of respect and inclusiveness – it is quite an impressive program. After lunch, we broke out into tracks based on different categories of interest to learn more about programs in our Western Galilee Partnership region.  I chose Young Adults and Budapest as these are areas of great interest to us in Dayton. We boarded a bus to a kibbutz where lone soldiers have a small complex of apartments that house 20 soldiers.  A lone soldier is defined as a service man or woman without immediate family in Israel.  Nate Shapiro from Omaha served as a lone soldier and told us his personal story of joining the IDF in 2006.  Nate became aware that joining the IDF was an option in 2006 when he attended the Brandeis Collegiate Institute and met some Israelis who he really connected to and the moment he realized joining the IDF was an option, he wanted to do it.  Nate said, “I decided that if I didn’t go over there to stand with my brothers and sisters, I would regret it for the rest of my life.”  Nate developed a study abroad program and made arrangements with the army while he studied in Haifa. He was then drafted for 18 months with the Nahal Brigade.  The experience was life changing for Nate. We arrived at the apartment complex and took a tour of the building.  I have to tell you, the size of the apartments were shockingly tiny comparted to what we find in the United States.  Two soldiers share a space with two twin beds pushed together on one side of the room and a tiny kitchenette on the opposite side of the room.  The only private space was the bathroom.  However, what the space lacked in physical size and creature comforts, was more than made up for by the emotional support from the residents in the kibbutz. From the apartment we went downstairs to a common area where there was an after school child care program taking place.  Our group and the children planted herb and strawberry boxes that would be given to the soldiers for their use.  It was a terrific activity for the volunteers and children and there was so much pride on the part of the kids who were doing something for the soldiers and show their appreciation.  Members of our group also wrote letters of thanks and support to be given to the soldiers. Next, Hedi Pusztai, the Partnership2Gether staff person from Budapest spoke of her personal story of reconnecting to her Jewish roots.  It’s such an emotional thing for her to talk about.  It’s hard to imagine that most of the young people in Budapest have never participated in a Passover Seder and they lack the family traditions that bind them to their Jewish identity that many take for granted. Progress is slow but steady, and our Partnership2Gether is working towards the continued existence of the Jewish community in Budapest through the younger generation including mutual learning from the models of the contemporary Jewish communities that are being built in Budapest, the United States and Israel. It was such a meaningful day, to say the least, and I learned so much about life on a kibbutz and rebuilding a Jewish life in Budapest that was almost extinguished by the Germans.]]>