Shaken By The Smell, Unnerved By The Day: Samantha Dubrinsky From the Birminham Federation Reports From Ukraine 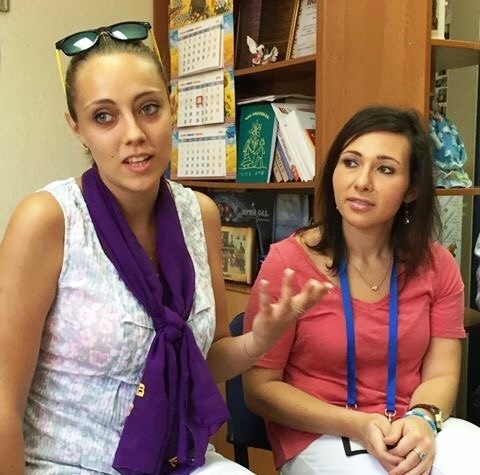 This week, we share a story from our Jewish brothers and sisters at the Birmingham Federation. Over the years, our Federations have developed a strong bond, and we are honored to help spread the message regarding what is currently going on in Ukraine. Below, Richard Friedman, Executive Director of the Birmingham Jewish Federation shares his personal connection to Dayton and our mutual support for both our Jewish communities.

We are very honored that the Jewish Federation of Dayton has chosen to publish a story from our Birmingham blog, Daily Update at www.bjf.org. We feel a very special connection in Birmingham to Dayton. Not only are there Daytonians in Birmingham, but there are Birminghamians in Dayton. I enjoy a very special connection because my daughter, Liora, is married to Rabbi Judy Chessin’s son Brett. But beyond those personal connections there is a broader and more overarching connection between our two communities. We both are devoted to Jewish life at home, have a passion for our collective Jewish future and care deeply about the needs of our Jewish brothers and sisters abroad. Our stories are your stories, your stories are our stories; once again, we are honored to have Dayton publish Samantha Dubrinsky’s article from the Ukraine. Richard Friedman Executive Director of the Birmingham Jewish Federation

Samantha Dubrinsky, the Birmingham Jewish Federation’s Director of Community Impact and Special Projects, visited Ukraine last week. She was part of a group of 18 Jewish Federation leaders. Trip members learned about needs facing Ukraine’s Jews and how Jewish Federations are responding. The group stayed in Dnepropetrovsk in south-central Ukraine. Samantha is pictured above, at a Federation-funded center in Zaporozhye, an area close to Crimea with a Jewish population of 15,000 and a total population of 1.5 million. The other woman is a volunteer who works with teens. Though Jews have not been singled out for persecution, Federation funds are helping to sustain many of Ukraine’s estimated 300,000 Jews during their time of disruption, fear and uncertainty. Below is Samantha’s report.

ZAPOROZHYE, UKRAINE — I can still smell the unsettling odor of a home we visited in Zaporozhye early Wednesday. I have a feeling that I will never forget that smell. At the beginning of this last full day in Ukraine, we traveled to a region close to Crimea, another area of conflict during the turmoil and upheaval that Ukraine is facing. On our way, we passed through checkpoints as we neared the conflict zone. Each checkpoint was a reminder that this country is facing severe uncertainty and I couldn’t help but think of our Jewish brothers and sisters, both in Israel and throughout the world. If this trip has taught me one thing, it is the importance of recognizing that each of us is a part of a global Jewish community. Thinking, while in Ukraine, of Israel’s challenges and the challenges other Jewish communities are facing abroad, further solidified this lesson. As our ancient sage Rabbi Hillel said, “If we are not for ourselves, who will be for us?” When we first arrived in Zaporozhye, home to about 1.5 million people and 15,000 Jews, we were welcomed into the Max Grant Jewish Home, a building that houses a network of vital Jewish community activities and programs supported in part by funds raised by Jewish Federation campaigns. We got a quick tour of the facility, hearing about how this center started out in the basement of a building with just two rooms. Now, it has grown to be a thriving place for Jewish life in a city wracked by economic distress and inundated with Internally Displaced People (IDP) as a result of the ongoing turmoil in their country. Visiting here was a breath of fresh air. We met seniors who were taking classes and IDPs who were learning how to cope with their recent trauma. The most exciting part of our visit for me, however, was hearing from the young Jews of Zaporozhye who are determined to make a difference. Listening to them speak about the future of the Zaporozhye community, and their hopes, dreams and aspirations, made me almost forget that a war is raging close by. They were inspiring and sincere in their desire to make a difference in their community and in Jewish life. Most of all, they were proud to be Jewish; they realize that being part of the Jewish community offers them strength, support and opportunity to thrive in an otherwise declining atmosphere.

This breath of new life did not last long. We left the Max Grant Jewish Home in four smaller groups, each assigned to visit a family that the facility helps through its social service outreach programs. My delegation was briefed on the family we were about to meet. “On a scale of 1 to 10, with 10 being the worst, how bad would you rank this case?” we asked the case worker. The answer was a 7. Even with that answer, I was not at all prepared for what I was about to experience. We walked into what could best be described as a crumbling shack to visit a woman and her son, who is mentally-challenged. The woman had heart surgery recently and cannot work. Her husband passed away a few years ago and she depends on her son to keep up the household. With it being just the two of them, it is a struggle and their house is in shambles. When we entered their home, I almost gagged at the odor — it was the kind of off-putting smell that lingers in your nostrils. The house was not fit for humans to live there, yet they have lived there almost their entire lives. The house has been passed down from generation to generation and they have inherited it, leaky ceilings, crumbling walls, and all. Aside from the house, this Jewish family has nothing. They use the restroom outside and the Federation-funded Joint Distribution Committee (JDC) recently installed a shower inside their home. Before that, they showered once a month, if that. Yes, once a month. They have nothing and will have nothing because of their inability to work. Without the help of Jewish Federations, they would not have enough money to eat or heat their home in the freezing winter. This is their life. I walked out of their home and could not control my tears. I have never experienced anything like it and I couldn’t help but think of how our “problems” — back in Birmingham and the US — are so trivial by comparison.

We got back on the bus and a fellow participant asked me if I was okay. I nodded my head yes and wiped my tears away. Another participant sitting behind me said quietly, “That will stay with you forever.” And, I suspect, he will be right. My heart is heavy for this family and for so many others who are facing similar circumstances. Without the funds raised through our Jewish Federation movement, JDC would not be able to provide for these families. Simply put, these people would perish. As we drove back to meet the larger group, we discussed Ukraine’s lack of welfare system and how, after its people lived under an oppressive Communist regime for so long, the idea of “tzedakah” (charity) or “tikkun olum” (repairing the world) are not ideas the Jewish community is familiar with here. It is because of the work JDC is doing that many Jews all over the former Soviet Union are still alive today. I am so proud that funds we raise through The Birmingham Jewish Federation and Foundation support this holy work. A couple of times this week, as our group has been in Ukraine, we have heard that those who are not Jewish are envious of those who are. This is because Ukraine’s Jews are being provided with humanitarian relief from Jews abroad. In a country such as Ukraine, with its long record of anti-Semitism and the horror of the Holocaust still lingering in the minds of many elderly Jews, the realization that right now it is “good” to be a Jew in Ukraine is hard for many to digest. And this is something that makes many of these Ukrainian Jews even prouder of their Judaism and connection to the Jewish people worldwide. Even as I write this, several hours after my visit to that struggling family, I am still shaken. But I also have hope. As I have written previously this week, the strength, bravery and perseverance of these people is astounding. Their pride in being Jewish reminds me to never take my own Judaism for granted. Perhaps more than at any point in my life, including my several years of working for The BJF, this trip has made me feel proud as a Jew and heightened my understanding of the compassion and selflessness of our people, including Jews in Birmingham. To honor the Jews of Ukraine, who are shouldering enormous burdens right now and facing momentous challenges, we should all affirm to do even more to help our global Jewish community. If one of our Jewish brothers and sisters is hurting, then we all are hurting. And I can tell you, right now there is a lot of hurt happening here.

Your donations to our Annual Campaign touch the lives of those locally, and the lives of those in Ukraine. Help us meet our Tikkun Olam goal by making your pledge today! Contact Alisa Thomas at athomas@jfgd.net or 610-1796 today.